Black Lives Matter to us 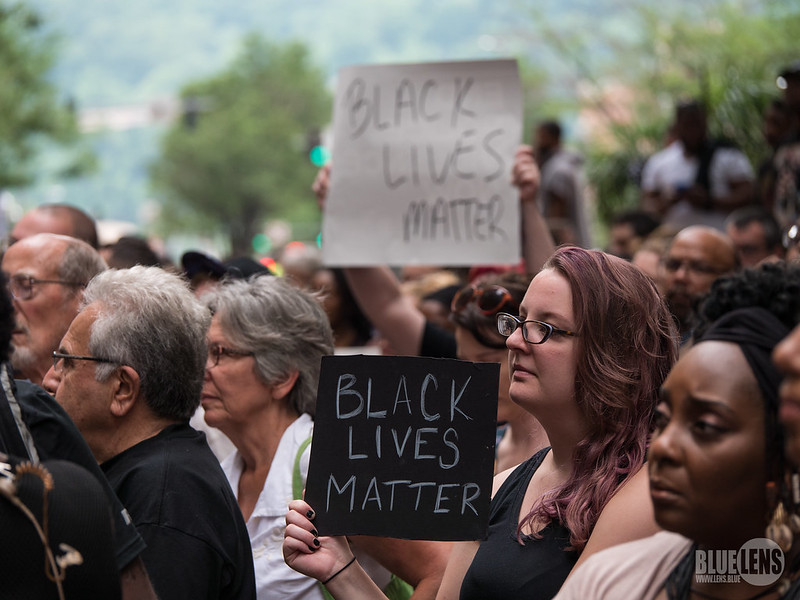 Black Lives Matter to us

The death of George Floyd at the hands of Minneapolis police has set off a wave of protests around the world, and here in Western Pennsylvania.

These demonstrations are not only an expression of anger — they are a cry for help that calls on White Americans to finally confront and dismantle institutional racism in the United States.

Racism holds a particularly strong grip in our home, the Mon Valley.

We have seen it in our history. We saw it when Black workers were pitted against White workers in the steel industry, being denied union leadership and then being given the most dangerous jobs. (Note 1.)

We saw it when Black veterans were denied many of the benefits of the G.I. Bill after World War II.

We saw it when federal funds were used to build affordable housing in the Mon Valley, and those developments were segregated, with White families given units in better locations than Black families.

Then, in the 1980s, the Mon Valley was largely abandoned by the industries that built it.

The disinvestment accelerated the economic and racial segregation in our area. Those who could afford to move away, did, while those who couldn’t — people who were often poorer and Black — were left behind to pick up the pieces, often with very few resources.

None of this happened by accident. The creation of communities that are separate and very much unequal is the result of deliberate decisions made by developers, investors and business owners, as well as neglect by elected officials and ordinary citizens.

MVI was formed more than 30 years ago as a response to those economic conditions. For three decades, Mon Valley Initiative has built trust in our communities.

We have listened to the people who were left behind and have worked to help them achieve economic justice. We have worked to develop programs that respond directly to community needs. We have brought together people who otherwise may have never worked on the same project or sat at the same table. We have always tried to ensure that everyone’s voice is heard. 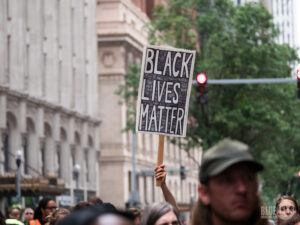 Our communities are still sharply divided along racial and economic lines.

There are neighborhoods where mostly Black residents live, but that are patrolled by mostly White police departments. There are municipalities with majority Black populations, surrounded by wealthier municipalities that are almost entirely White.

We have taken for granted that MVI’s work is helping to eliminate racial injustice in the Mon Valley, but we also have a responsibility to be a recognizable voice.

We know that our work has often made some people uncomfortable — especially our insistence on providing equal housing opportunities, and our efforts to help people re-enter the workforce after involvement with the criminal justice system.

But we need to do more.

Over the past month, the MVI board and staff have committed to a more direct approach to combating racism in our lives and work. We realize that it’s not enough for us to assume that economic justice leads to racial justice. It hasn’t.

It is time for us to say, loud and clear, that Black Lives Matter to us, and that we are striving to be an anti-racist organization.

We will confront and root out racism through additional education that our board and staff are undertaking.

Even as we continue the work that has been the backbone of our support for Mon Valley communities, we will be a more vocal advocate for change by first confronting areas in our own purview then partnering with others who are also committed to the cause of justice and equality.

This work will not be quick or simple.

The issues are complicated, and we know we will make mistakes along the way.

The Mon Valley is not a place where trust comes easily to anyone, but Mon Valley Initiative is and will be invested in our communities for the long haul.

We are deeply committed to our work, even when it has required many years of small, incremental efforts before we could see the results at the community level.

As a result, we believe Mon Valley Initiative is uniquely positioned to continue to be a bridge that connects people and rebuilds our communities, not just economically, but with racial justice.

The energy of the current protests has reinvigorated our commitment to construct a more equitable society. Progress will continue to be made. But it is crucial that we do not let this important moment slide away from our own minds and consciences.

It is not enough to quietly continue our programs. We must add our voice to the chorus of those crying out for change across the entire spectrum of the American landscape.

We are asking that each person reading this—especially White people who may be grappling with these issues personally for the first time—do the work to learn more.

Let’s look into our own hearts and minds, face our personal biases and begin rooting them out. There are many resources to help start this process, and we are sharing several in the links below.

Over the coming months and years, MVI will build capacity for further community engagement efforts to fight racism.

We welcome your ideas and feedback that will help us build the trusting relationships that will be so necessary for real cultural change to take hold.

Please reach out to MVI staff or board members that you know and join us as we identify the issues and take deliberate actions to address them, now and into the future.

Footnote 1 — Tony Buba’s 1996 film “Struggles in Steel,” made with Ray Henderson, provides an overview of the obstacles that were put in the way of Black steelworkers in the Mon Valley. 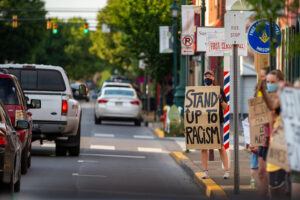 Additional resources to start the discussion

The following racial justice resources were supplied by the Jefferson Regional Foundation in its June newsletter, and we think you’ll find them helpful for starting a discussion.

We are reproducing them in their entirety:

How to Build an Actively Anti-Racist Workplace — Quartz at Work

For parents and children:

Books for Explaining Anti-Racism to Your Kids — New York Times

How to Talk to Your Kids About Anti-Racism — PBS

Your Kids Aren’t Too Young to Talk About Race: Resource Roundup — Pretty Good