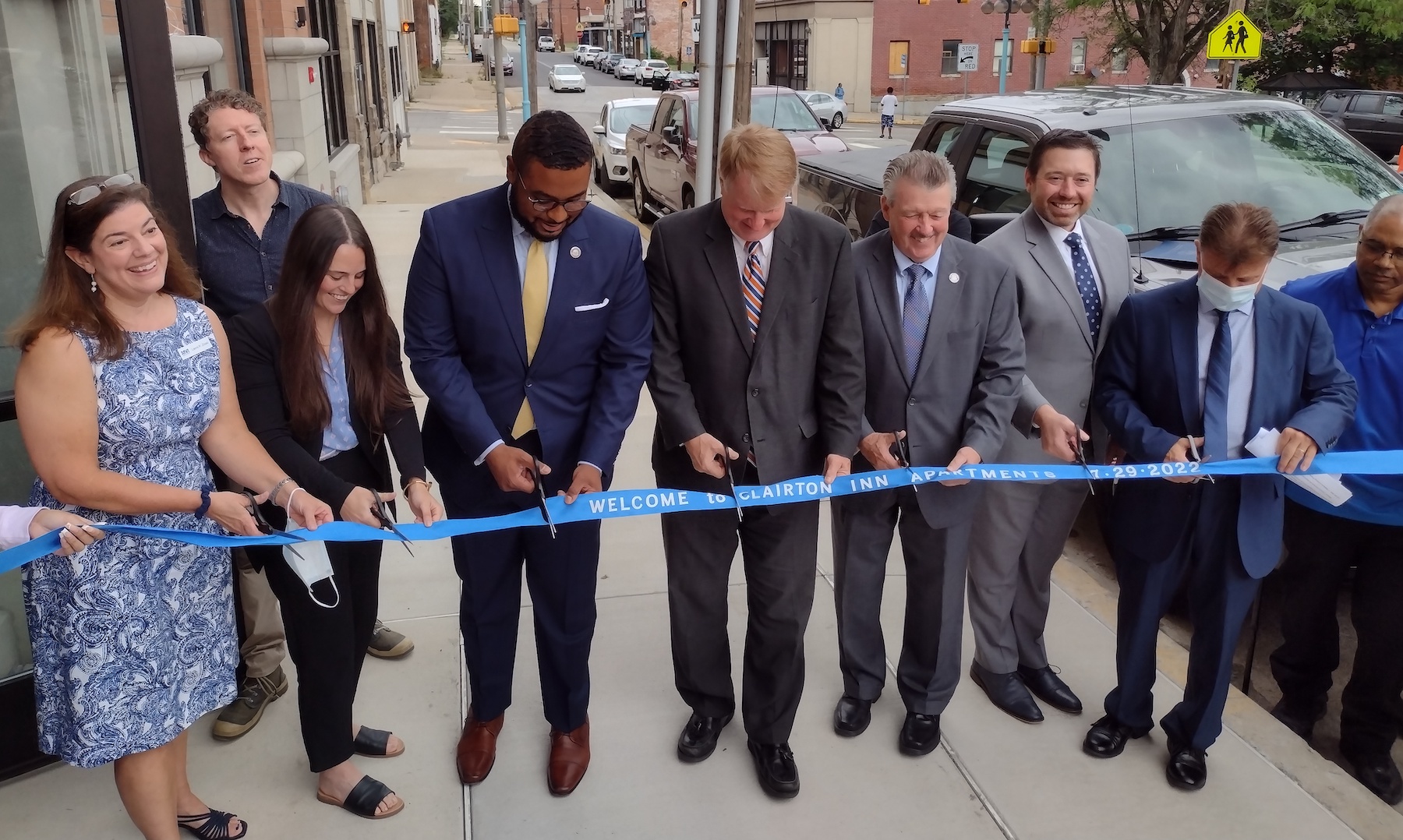 The Clairton Inn Apartments, located at the corner of Miller and St. Clair avenues, will begin welcoming its first tenants in September. The 70,000-square-foot building, which spans most of a block, incorporates the historic 1902-vintage Clairton Inn Hotel as well as substantial new construction.

Mon Valley Initiative, a regional community development corporation, is the developer of Clairton Inn Apartments, which also includes four new first-floor commercial spaces as well as a space anticipated for the relocation of the Clairton Public Library.

LGA Partners is the architect and Mistick Construction Co. is the general contractor.

“What an honor and a privilege it is to be here today,” Clairton Mayor Rich Lattanzi said. “Who would have thought three or four years ago, when we were talking about building up our business district, we would be here today to see this beautiful building? What a dream come true for the City of Clairton.”

More than 100 Clairton residents attended the event, which included tours of the recently completed apartments. The building includes one-, two and three-bedroom units and several apartments are equipped for residents with physical or mobility challenges. All of the units are designed to remain affordable for residents making between 20 and 50 percent of the area median income.

The project included $2.4 million in contracts awarded to minority- and women-owned business enterprises and employed 16 Clairton-area residents as construction laborers, who together contributed approximately 4,000 hours of work.

One of those laborers, Derrick Middlebrook, was recognized by Mistick Construction for his outstanding job performance on the project. Thomas said that Middlebrook did not miss a single day of work despite commuting from Pittsburgh every morning.

“When they said they were doing this project in Clairton, I knew I had to be a part of it,” Middlebrook said. “I wanted to do something positive for my community.”

Support also was provided through a neighborhood partnership program that included BNY Mellon and Highmark.

“This project ties together recognition of the city’s past, a commitment to residents today and new hope for years to come,” said Doyle, who thanked Brewster and Davis for their efforts to attract state funding to the development.

“It is a legacy project for each of you,” she said. “Your tenacity and support really helped get this project to the finish line and we would not be here today if not for you.”

Brewster said the “herculean effort” to raise the $17 million is a credit to the hard work of Clairton’s mayor, council and school district.

Construction of the Clairton Inn Apartments included demolition of several blighted and abandoned buildings along Miller Avenue. Although a groundbreaking was held for the project in October 2020, Davis pointed out that the planning actually began “long before that.”

“I want to thank all of the people and organizations who were involved and who refused to quit when the going got tough,” Davis said. “The Clairton Inn is a shining example that we can reshape the heart of Clairton and create meaningful, positive change that the people of this city deserve.”

Interest in the vacant units at Clairton Inn Apartments has been strong, MVI officials said. More than 160 applications for apartments have been received and are currently being processed by NDC Asset Management LLC.

For leasing information and applications, visit www.clairtoninn.com or call 412-271-1300.