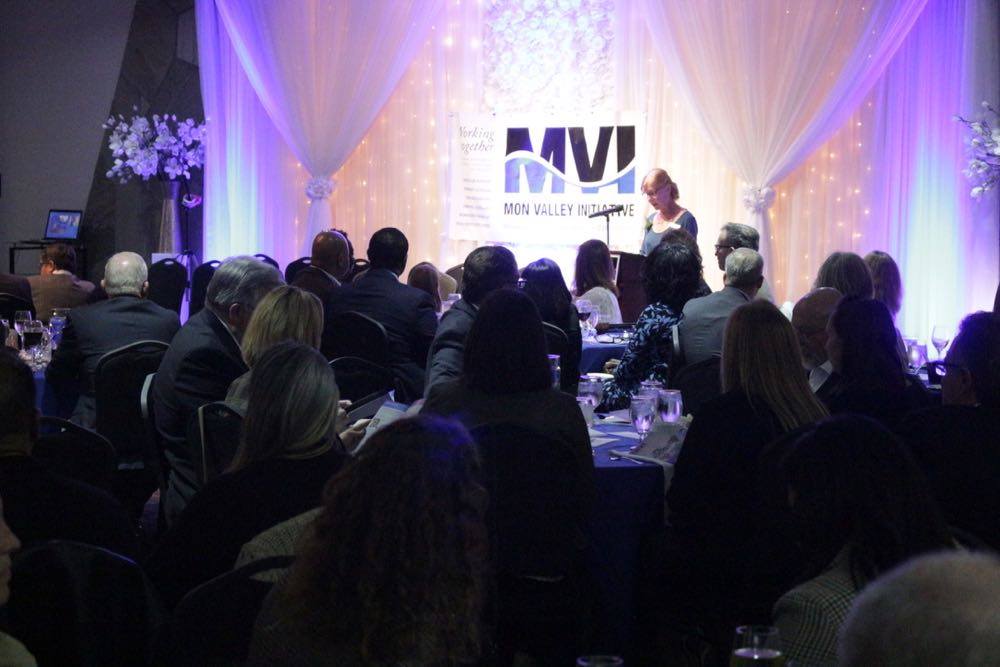 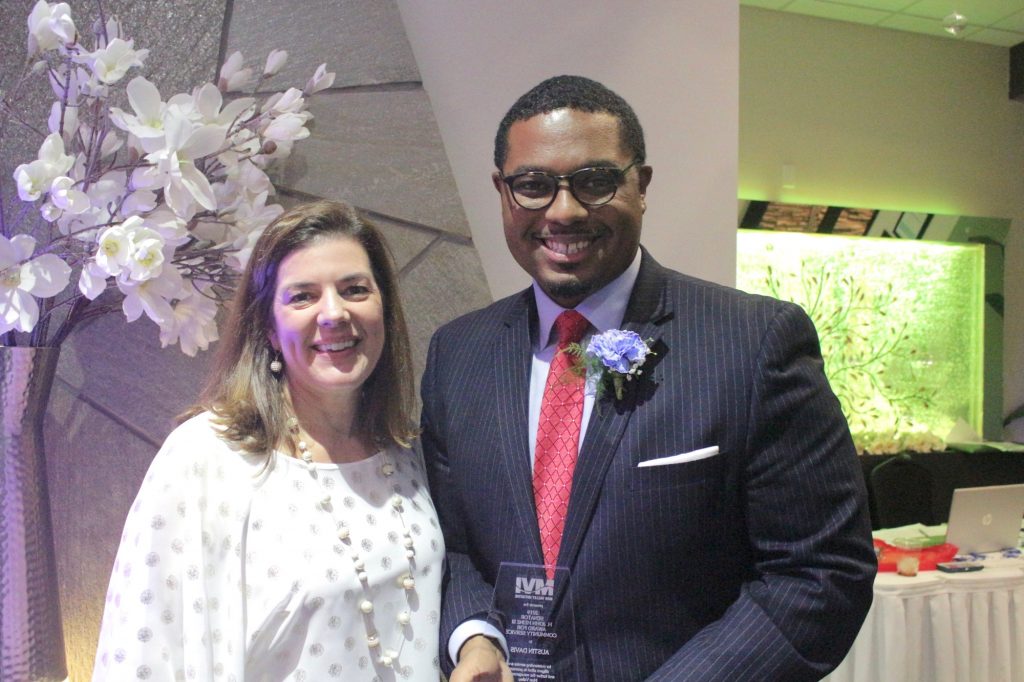 Austin Davis grew up hearing stories about how prosperous the Mon Valley was in the 1950s and 1960s. “That’s never been my reality,” said Davis, who recently turned 30.

Now, as a state legislator from McKeesport, Davis said he is seeing signs that the region has turned a corner.

Davis was honored Oct. 17 by Mon Valley Initiative with the organization’s U.S. Sen. H. John Heinz III Award for Community Service. The award was presented at the Sunset Room in Elizabeth Township. About 180 people attended.

Many different forces are coming together to ensure that “brighter days are still ahead of us,” Davis said.

Laura R. Zinski, chief executive officer of MVI, said that since Davis took office in 2018, he has championed economic development efforts throughout his district, including the redevelopment of a commercial block in Clairton and expanded access to public transit.

“Sometimes people get a big job like state representative and say, ‘I can kick back and relax a little bit,’” Zinski said, but Davis “worked so hard this year, advocating tirelessly for projects that were going on around the Mon Valley. We admire (him) and we’re grateful that (he) went into public service.”

Davis thanked his wife, Blayre, and his parents, who also were present Thursday night, for their support. 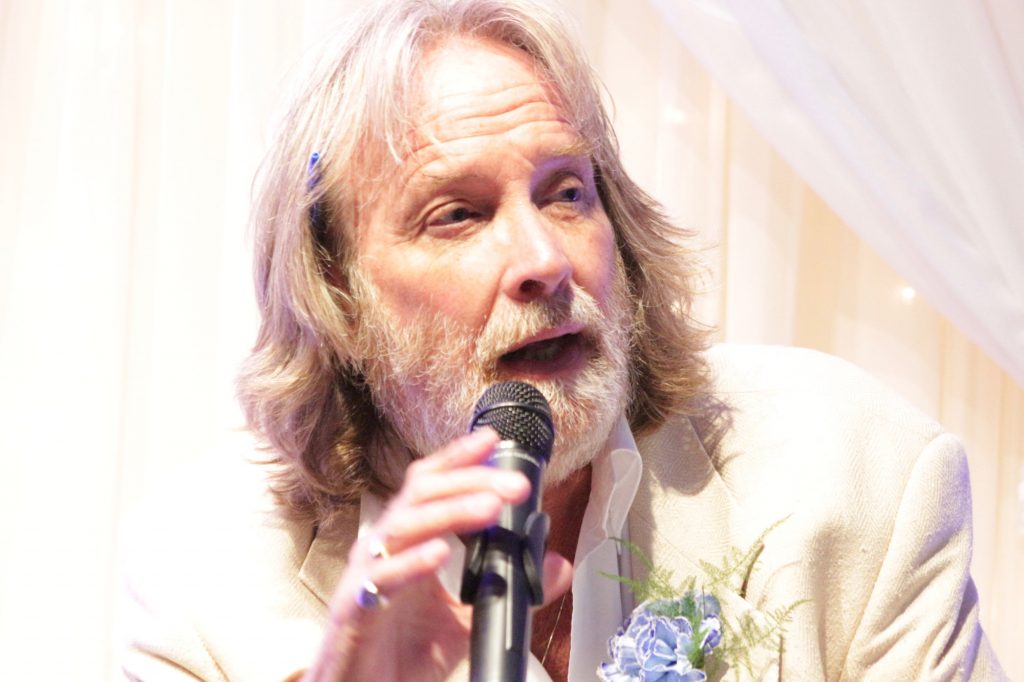 He recalled his eight years as a disc jockey at the former Y-97 FM and Magic 97 radio in Braddock, which was then located near the entrance to U.S. Steel Edgar Thomson Works in a former car dealership next door to Royal Café.

“I understood quickly why (Royal Café) was packed at 7 a.m. in the morning because it was shift change at the mill, and everyone would come in and have their shot and their beer before they went home,” McDowell said, adding, with a laugh. “Braddock is also where I hit my first-ever number and got paid cash in a brown paper bag.”

McDowell, who turned 64 this month, joked that unlike Davis, he was old enough to remember the glory days of the Mon Valley. His parents were born in Clairton and his grandfather was a former mayor of the city.

McDowell remembered working in the 1970s as a college intern in local steel mills, where old-time steelworkers laughed at his white denim jeans and shoulder-length hair. “They gave me a hard hat to wear, which of course wouldn’t fit because of my hair,” he said. 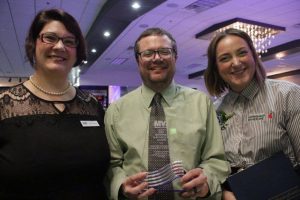 Greater Pittsburgh Community Food Bank, based in Duquesne, was presented with Mon Valley Initiative’s Regional Partnership Award for 2019. April Hoover, chief financial officer of MVI, said her group has been “proud” to partner with the food bank over the years.

“The Greater Pittsburgh Community Food Bank is a champion for hungry people — both throughout out area and throughout the state and the country,” Hoover said. “They are a resource for us when people come to our programs who don’t have enough to eat, or who need help applying for SNAP benefits, or free or reduced-price school lunches.”

The food bank, she noted, works through a network of 400 different agencies in 11 counties in Pennsylvania to provide the equivalent of more than 30 million meals every year. 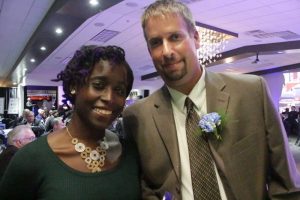 Braddock Mayor Chardae Jones presented the group with a Community Partner Award, which was accepted on behalf of the Braddock Partnership by Jim Phillips, manager of the student assistance, prevention and intervention program of TCV Community Services. 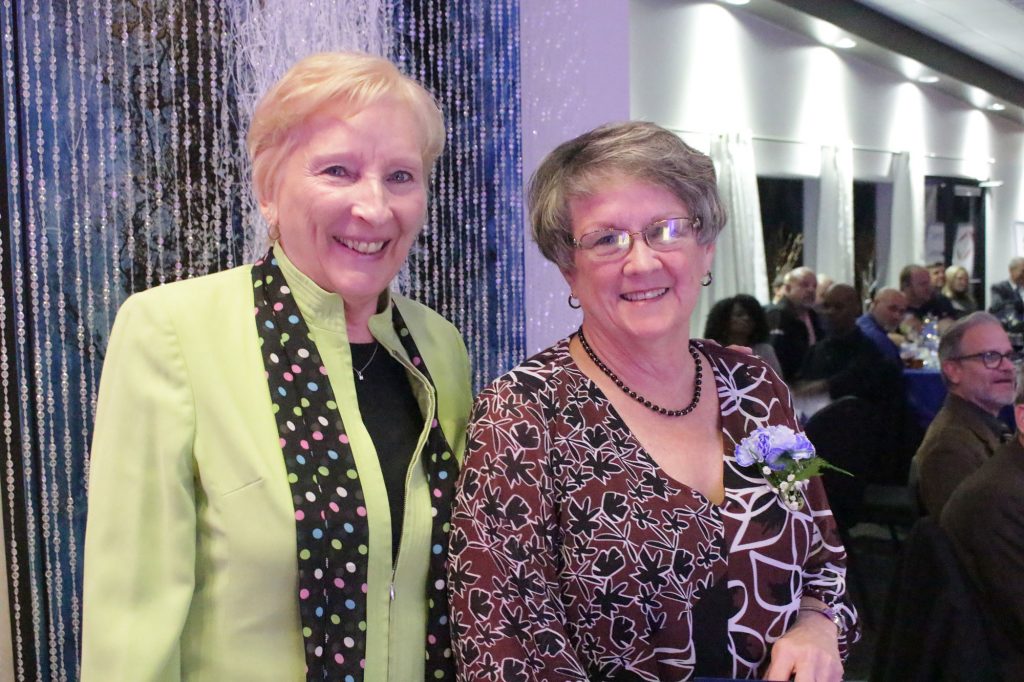 Also presented with a Community Partner Award was Friends of the Swissvale Library. “I have always loved libraries and I viewed them as wonderful, magical places,” said Terry Ward of the Swissvale Economic Development Corp., who presented the award. “As an English teacher, I always tried to share that love with my students.”

Without the Friends of the Swissvale Library, “the fate of our library would be in jeopardy,” Ward said.

Sharon Ramsey, the library group’s president, accepted on its behalf. She encouraged the audience to look for volunteer opportunities in the community: “It really bonds you with other people.” 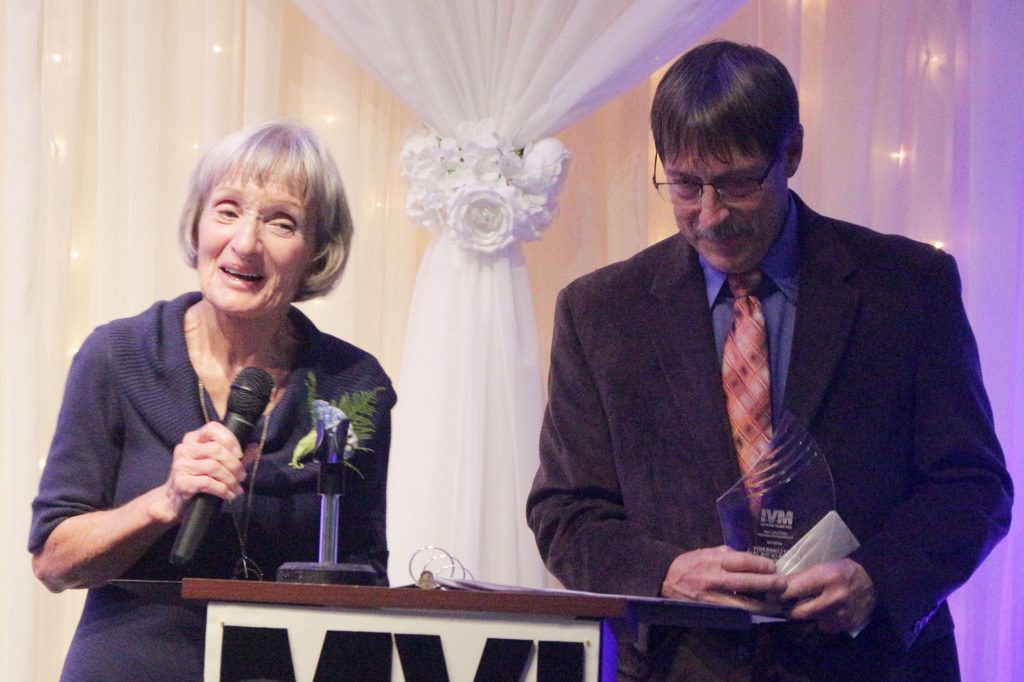 Turtle Creek resident Eileen Pickle was honored with a Community Partner Award for her work on the borough’s Home Plate Garden, which provides fresh produce for people in the neighborhood as well as food pantries.

“When I first met Eileen, I wondered how much help she would be,” said Dale J. Bizub of Turtle Creek Development Corp. “She does not look like your typical farm girl — we have shovels that are bigger than her. But she can work circles around the rest of us. She is a powerhouse who has stepped up and become the main driving force behind our Turtle Creek community garden.” 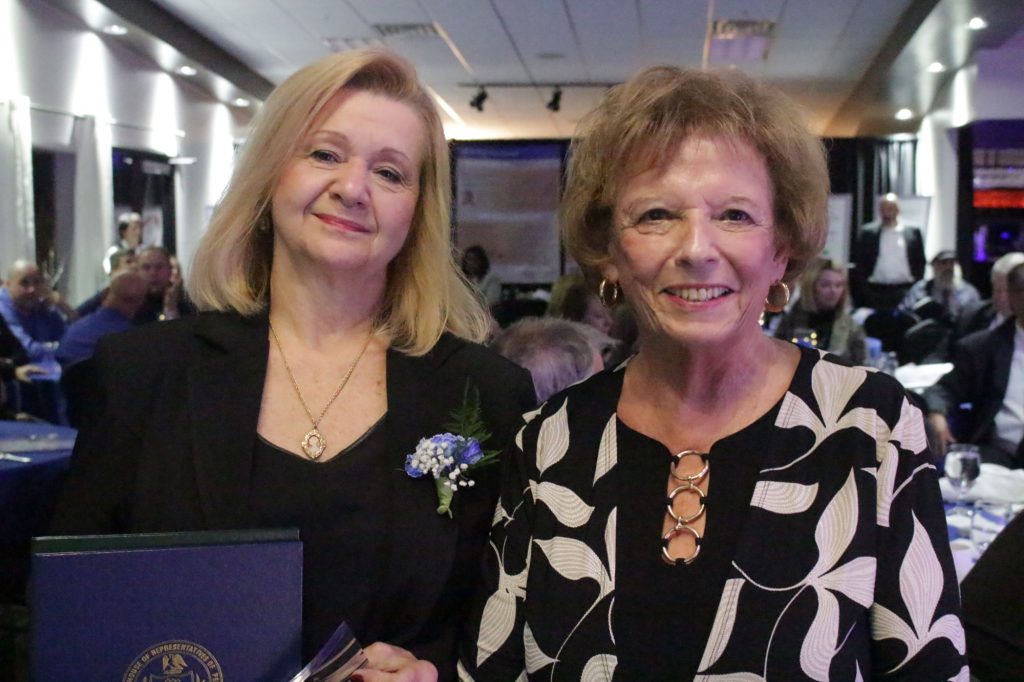 Also honored by MVI on Thursday was Patsy Brinker of Charleroi, a former member of the Charleroi Area School Board and a current member of the board of directors of the John K. Tener Library and the Greater Charleroi Community Development Corp.

Brinker received a Community Partner Award for 2019 from Judy Rager of the Greater Charleroi CDC.

“Patsy is willing to spend the day doing whatever it takes, from planting flowers, to making cotton candy — and making herself all pink in the process,” Rager said. “She is very enthusiastic and always goes beyond the call of duty.” 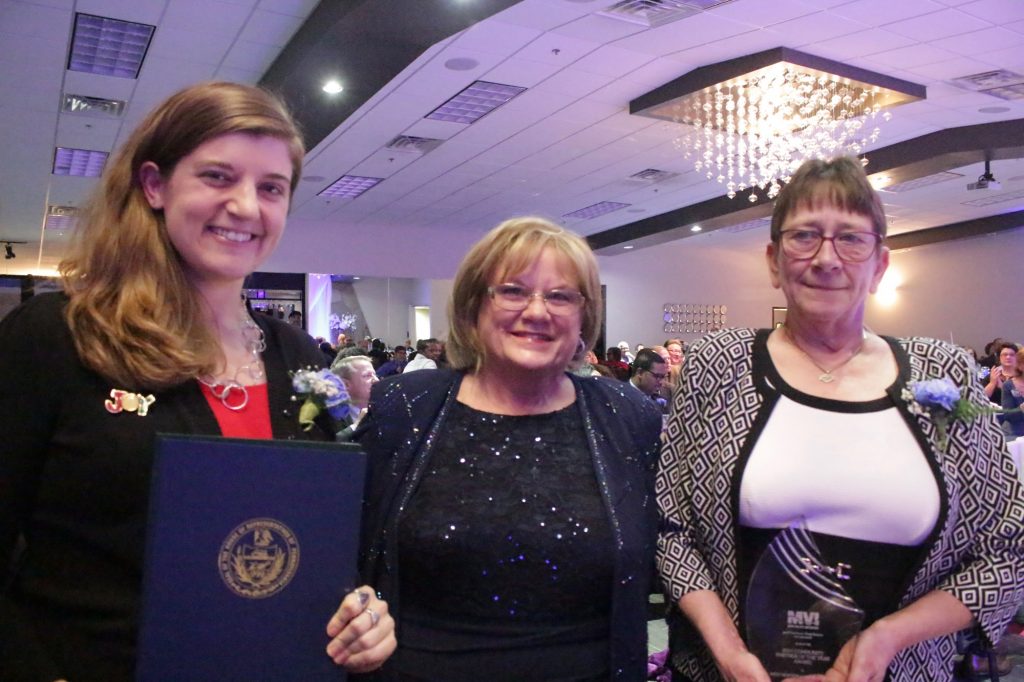 The organizers of the West Newton Avenue of Flags were presented with a Community Partner Award from Downtown West Newton, Inc.

Avenue of Flags is an annual display erected in West Newton Cemetery in the weeks before Memorial Day that salutes area veterans. Stacey Federoff and Kathie Montgomery accepted on behalf of the volunteers.

Federoff said she began working with Avenue of Flags as a teen-ager and thanked her family, including her late grandmother, Nancy Barbera, for teaching her the importance of volunteering. “When community service is instilled in you as a young person, it never leaves you,” Federoff said.