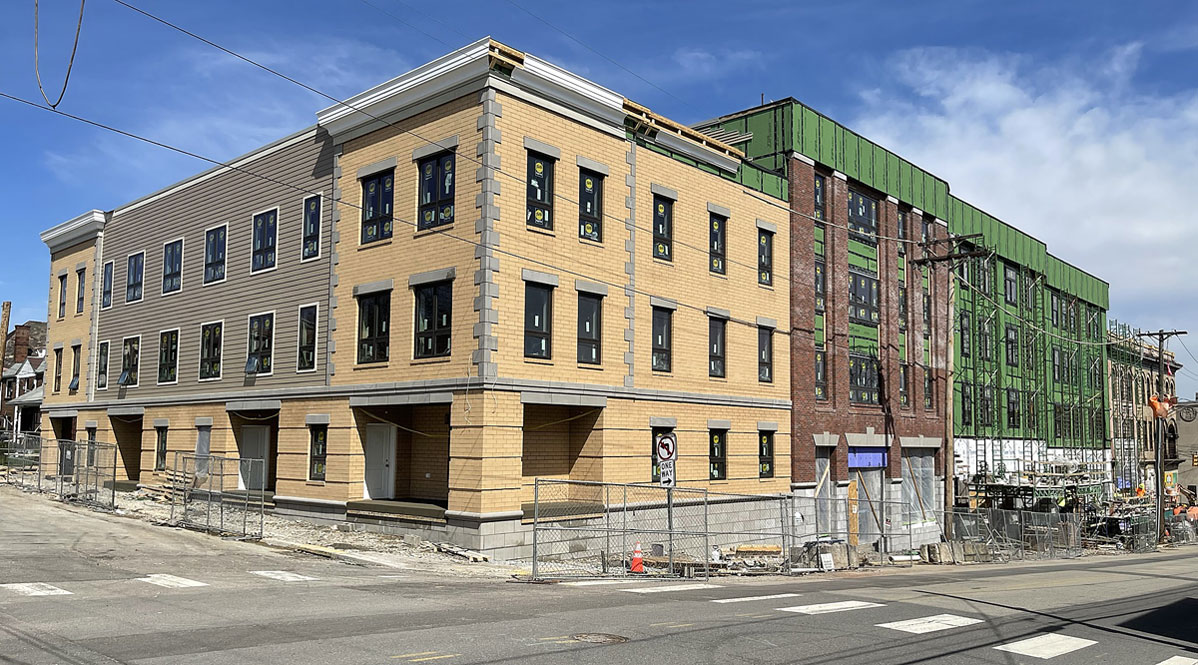 The last three years have been busy ones for the real-estate team at Mon Valley Initiative, which in 2020 and 2021 completed two major projects—the Swissvale Schoolhouse Condominiums and the Holland Avenue Homes in Braddock—while beginning work on the Clairton Inn Apartments.

In 2022, as construction on Clairton Inn wraps up, the MVI real estate and construction team will be hard at work on a new neighborhood partnership program, or NPP, in North Braddock Borough and part of neighboring Braddock.

Over the past two years, MVI’s real estate team has coped with COVID-19 lockdowns, supply-chain disruptions, the spiraling cost of construction materials and other setbacks. That means progress hasn’t been smooth or easy at times, says Andrew Ritchie, MVI senior real estate developer, but nevertheless, multiple projects are moving in a positive direction.

“I feel like we’ve weathered a storm the last few years,” he says. “We’ve turned a corner and I’m excited about the stuff we’re doing in Braddock and North Braddock.”

Real estate development—particularly of affordable, quality housing—has been a part of Mon Valley Initiative almost since its founding. Over the past 15 years, MVI real estate projects represent more than $45 million in direct investment to its targeted communities. Since its inception, MVI has built, rehabilitated or helped to facilitate the creation of 626 units of housing, including single-family homes, condominiums and rental properties. In 2022, 57 additional units are in various stages of development, including the 49-unit Clairton Inn Apartments, a $16.7 million mixed-use residential and commercial building located at a strategic intersection in the City of Clairton.

MVI’s approach, which includes creation of market-rate housing as well as subsidized housing for families of low or moderate income, is reflected in the Swissvale, Braddock and Clairton developments. 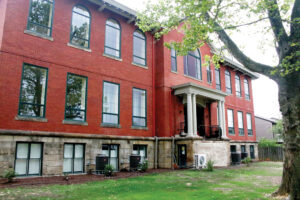 The Swissvale condominium project rescued a landmark former school house that was on the National Register of Historic Places, but was left standing vacant after being condemned by the borough for health and safety violations. Working with architects from LGA Partners and contractors from DRS of Greater Pittsburgh, the building was converted into 18 single-family condominium units. Following their completion in 2020, the condo units sold for between $150,000 and $215,000 each.

In Braddock, MVI partnered with Dollar Bank, PNC Bank and WesBanco Bank on an NPP to redevelop the former site of UPMC Braddock Hospital, which closed in 2010. The site is now home to a 24-unit townhouse development called The Overlook; a new commercial building at 501 Braddock Ave.; The Avenue Apartments, a 53-unit senior citizen complex; and the Clara E. Davis Friendship Plaza, a $1 million greenspace developed by MVI that provides space for entertainment, recreation and food trucks.

In 2021, the last significant parcels of vacant land on the former hospital site were occupied by six new single-family homes constructed by MVI along Holland Avenue.

Those homes, which sold for $140,000 to $150,000 each, “were the final piece of the puzzle in redeveloping that property,” says Dave Yargeau, real estate developer. All six of the homes were purchased by people who were previously renting in Braddock, Swissvale and Rankin, he says. “Now they’ve put down roots,” Yargeau says.

The Clairton Inn Apartments, scheduled for completion in late summer 2022, are designed to stay affordable for residents making 50 percent or less of the Pittsburgh area median income, or AMI, with some units reserved for families making less than 20 percent of the Pittsburgh area AMI.
When complete, the building will include several units fully compliant with the Americans with Disabilities Act, an elevator, an on-site laundry and other amenities.

Spanning most of a city block on Miller Avenue in Clairton, the Clairton Inn development includes the rehabilitation of the old Clairton Inn, a hotel built in 1902, as well as new construction. LGA Partners is the architect and Mistick Construction is the general contractor. “The city has been very supportive of Clairton Inn,” Ritchie says. “I think we’ll get a lot of residents in Clairton Inn who are already living in the city, but are living in sub-standard housing, or are seniors who want to downsize from larger homes.

“I also can’t say enough good things about Mistick,” he says. “They’ve done a great job hiring people from the community. At the outset, they set a goal of hiring 12 people from Clairton onto the site. They’ve since hired 14 or 15 Clairton residents, including one whom they connected with a carpentry training program.”

Funding is being provided through tax credits authorized by the Pennsylvania Housing Finance Agency and purchased by PNC Bank, with additional support from the state Department of Community & Economic Development, Allegheny County Economic Development and the City of Clairton.

Completing the Swissvale and Braddock developments—and breaking ground in Clairton—was complicated by the COVID-19 pandemic, Ritchie says. “Lumber prices soared, and we had to renegotiate some expenses,” he says. “We also had to do some additional fundraising.”

Yargeau, too, remembers some sleepless nights in 2020 when sections of the Holland Avenue Homes, which were built off-site, arrived in Braddock but couldn’t be assembled because non-essential construction work had been shut down due to the COVID-19 emergency.

“COVID delayed that entire project two or three months,” he says. “Those units weren’t meant to be stored for that whole time period! But since we couldn’t do any construction work from March until May 2020, there wasn’t much else we could do.”

Things are going more smoothly now, Ritchie and Yargeau say. And they’re already seeing the spinoff effect from MVI investment in both Clairton and Braddock. In Clairton, the city recently secured ownership of a vacant former bank building on St. Clair Avenue, opposite Clairton Inn, and is soliciting community input to identify possible reuses. “A lot of the ideas so far are for recreational uses, and I think there’s a lot of potential there,” Ritchie says. Clairton officials are discussing plans for greenspace and additional parking in the surrounding neighborhood as well, he says.

The North Braddock Revitalization program, being led by MVI in partnership with the Braddock Carnegie Library Association, builds on the Braddock Borough NPP that resulted in the successful redevelopment of the UPMC Braddock Hospital site.

Although North Braddock is closely linked to Braddock, the borough has not yet seen the kind of new business development that has brightened Braddock’s main avenue in recent years. For the past three decades, North Braddock’s population has steadily declined, leaving many homes vacant, which has depressed property values—the average home value in North Braddock is only $38,100, compared to $140,600 in the rest of Allegheny County.

Poverty and unemployment are serious problems in North Braddock as well—about one-third of the borough’s residents live below the poverty level and the jobless rate is roughly twice that of the rest of Allegheny County.

“A lot of houses have fallen into disrepair,” Yargeau says. “We’ve found a lot of tax-delinquent properties with questionable ownership—in many cases, owners have died without identifying any heirs—and there are entire blocks of Hawkins and Lobinger avenues that have been abandoned and, essentially, gone back to nature.” The North Braddock NPP is designed to address the need for targeted, strategic real-estate investments that provide quality, affordable housing while also removing blight, Yargeau says.

Funded by Huntington National Bank, Dollar Bank, KeyBank and WesBanco Bank, the North Braddock NPP was approved by the state Department of Community & Economic Development in 2021 and began July 1.

Among the NPP’s first objectives will be conversion of the former First United Presbyterian Church into eight mixed-income apartment units. Strategically located next to the Braddock Carnegie Library, the church was acquired by MVI from the Pittsburgh Presbytery after the congregation disbanded in 2018. “We’re using a wide variety of funding streams, ranging from community development block grants, state and federal historic preservation tax credits, and private foundations,” Yargeau says. “We want to include as many of the historical details as we can, including the chandelier, the exterior and the façade of the pipe organ.”

MVI is hopeful that contracts for the renovations will be awarded sometime in 2022, with construction taking 18 months, he says.

Although challenges remain—for instance, funding for the five commercial spaces at Clairton Inn is still about $350,000 short—there are plenty of reasons to be excited about the progress that’s been made, Ritchie says. “This is a good time to be in real estate at MVI,” he says. “I’m optimistic about the future.”