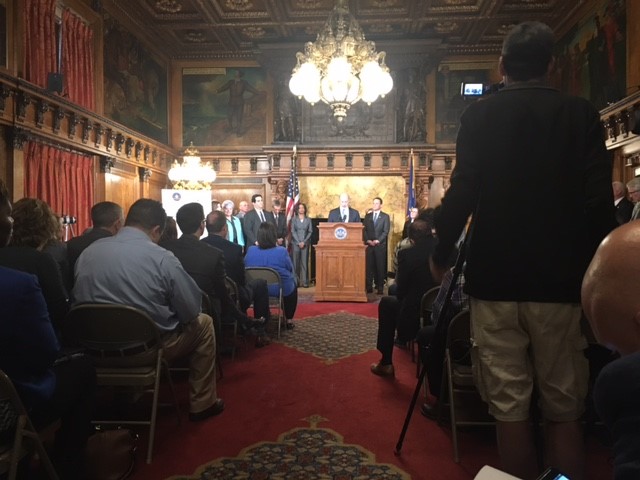 Workforce specialists from Mon Valley Initiative on Monday joined colleagues from across Pennsylvania at the formation of a new state-level effort to help former prisoners successfully re-integrate with society.

The meeting in Harrisburg was part of the announcement by Pennsylvania Gov. Tom Wolf and state Attorney General Josh Shapiro of the newly created Pennsylvania Reentry Council, an effort to make communities safer and reduce the rate at which ex-convicts commit new criminal offenses.

“For too long, we’ve relied solely on incarceration to prevent crime and violence,” Attorney General Shapiro said. “When two of every three people emerging from jail commit another crime and return, it’s clear the system is broken. By working collaboratively with law enforcement, state and local government and communities, we can create new strategies to expand opportunities and assist returning citizens as they reenter their communities, and make our commonwealth safer as a result.”

Four state agencies—the Office of Attorney General, the Pennsylvania Commission on Crime and Delinquency, the Department of Corrections, and the Board of Probation and Parole—will coordinate the Pennsylvania Reentry Council. These lead agencies will be joined by eight other state agencies, 21 Reentry Coalitions from communities across the Commonwealth, all three U.S. Attorneys’ Offices in Pennsylvania, and other re-entry experts.

Wolf said the council will bring together both stakeholders and service providers to be the center for re-entry efforts in Pennsylvania. “It is in all of our interests that re-entrants to the community are as successful as possible in their transition back home,” he said.

The Pennsylvania Reentry Council will meet quarterly as it works through addressing the primary challenges facing returning citizens and communities. Those challenges include:

“The Reentry Council is an important step for the Attorney General’s Office and its local, state, and federal partners to make communities safer by providing opportunities for returning citizens and assisting them in making choices that will help keep them out of prison,” said Robert K. Reed, state Executive Deputy Attorney General for Public Engagement.

Immediately following the press conference, the inaugural meeting of the Reentry Council was held at the Office of Attorney General in Strawberry Square.

“Today’s announcement of the Pennsylvania Reentry Council is a beginning,” Shapiro said. “Now the real work begins as we develop and execute prevention and reentry strategies that make Pennsylvania communities safer for everyone.”