Awards recognize community partners for their dedication to the Mon Valley 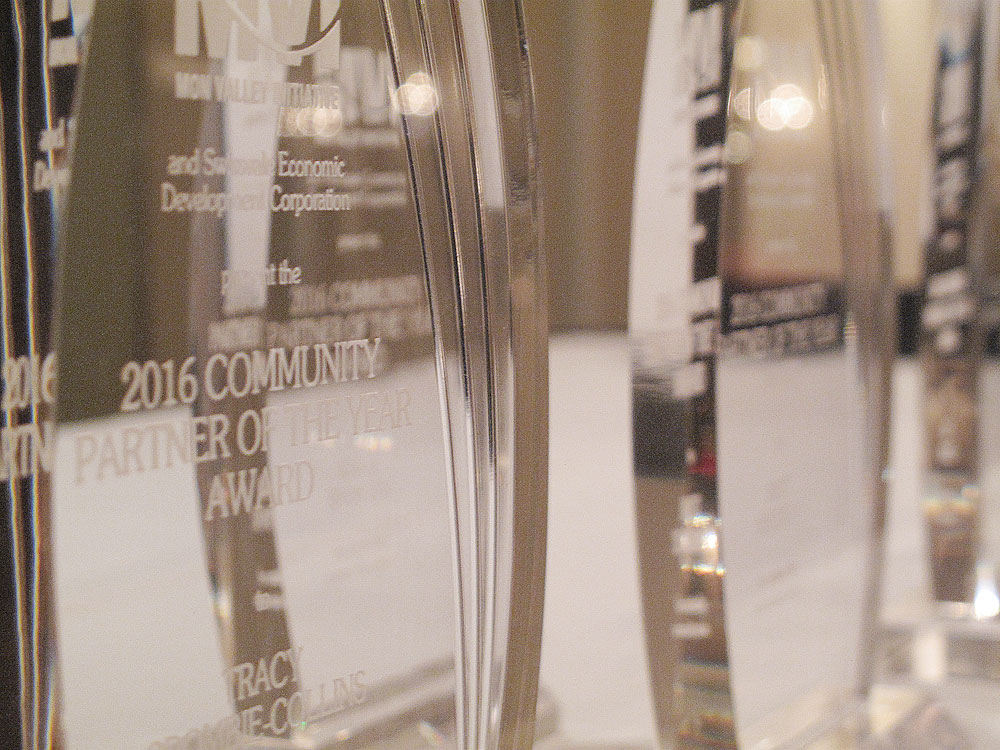 Awards recognize community partners for their dedication to the Mon Valley

More than 200 people attended a banquet Thursday night honoring groups and volunteers from the communities that are represented in the Mon Valley Initiative.

The awards ceremony at The Willow Room in Rostraver Township was emceed by Cara Sapida, a reporter and anchor for WPXI-TV (11), Pittsburgh.

Sapida is a native of Turtle Creek in Allegheny County and grew up a few doors away from Dale Bizub, a volunteer with the Turtle Creek Development Corp., who also serves as chair of the Mon Valley Initiative’s governing board.

Bizub showed the audience a photo of Sapida, as a child, hanging out on his front porch with his own children, and remembered how surprised — and proud — he was to see her on TV years later.

Sapida said she learned the value of hard work and honesty growing up in Turtle Creek and especially in hearing stories from and about her grandfather, who ran a community pharmacy, John’s Leader Drugs, in the borough’s downtown area. John Sapida often extended credit to customers who needed a prescription but couldn’t afford it, she said. 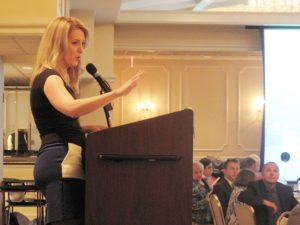 “There was a pillar behind the prescription counter that was covered with Post-It notes,” Sapida said. “Some of them were yellowed with age. I didn’t know what they were. I found out later that they were IOU’s.”

At her grandfather’s funeral, she said, she heard countless stories from Turtle Creek residents who said her grandfather had helped them in times of crisis. In some cases, Sapida said, they claimed he had saved the lives of their loved ones by providing needed medicines.

The Mon Valley Initiative, based in Homestead, Allegheny County, is a coalition of community development corporations from Allegheny, Washington and Westmoreland counties and provides housing and real estate development, housing counseling services, workforce development and training, and community outreach.

Laura Zinski, Mon Valley Initiative’s chief executive officer, said that Cipriani has tirelessly worked for more than 27 years to increase investment in affordable housing, and to encourage partnerships between the public and private sectors.

“She has reached out to so many different people and organizations, as she is genuinely seeking new ideas and real solutions to the challenges that face our region,” Zinski said. “And with (Cipriani), we know that if she says she’s going to do something, it will get done. Her sincerity and follow-through are well-known traits.” 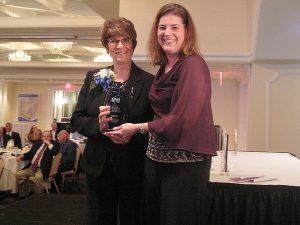 MVI also recognized the Mon Valley Providers Council with its 2016 Regional Partnership Award. Supported and staffed by the Human Services Center Corp. in Turtle Creek, MVPC is an alliance of more than 70 organizations and individuals that provide help with employment, job training, health care, housing and youth development.

“The Providers Council has served as a place where experts from all of these disciplines can break out of the silos and mingle with each other, engaging across traditional organizational divides to think about the challenges facing the Mon Valley,” Zinski said. “And most importantly the Providers Council has created a space for all of these groups to learn from each other and work together to fill gaps and improve the quality of life for people who live in the Valley.”

She praised what she called the “small but mighty team” at the MVPC, led by Executive Director Dave Coplan. Coplan accepted the award on behalf of the group. 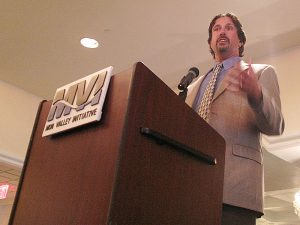 In addition, Community Partner Awards were presented Thursday night by the community development corporations that are part of the MVI coalition.

Seven awards were presented in all, including:

“It’s not a ‘senior center,'” she said. “That’s a dirty word. We are active adults and our goal is to help people feel comfortable and live a full life, and we can thank Downtown West Newton, Inc., for helping us continue to do that.”

Adele Hopkins, president of the Greater Charleroi CDC, said she has known Garlitz for 50 years but has worked with her on many projects only over the past seven years.

“Alix is the kind of person you want in your community,” Hopkins said. “She does whatever you need her to do.”

Garlitz thanked the many people with whom she serves on the Greater Charleroi CDC and other community organizations.

“In reality, I’m just up here as a representative” for all of the other volunteers, Garlitz said. “We love our community and we want to do whatever we can to make it a better place to live.”

“When you talk about Matt, you can mention just about any event in Monessen and chances are, he’s going to be involved in it,” said Delmar Hepple, a member of the MCDC.

Both Shorraw and Spangler bring youth and enthusiasm to their work, Hepple said. “One thing about both Matt and Karla is that although there are roadblocks in life, they just find ways around them,” he said. “They’re both involved in so many of the same activities, and their hearts are in the same place.”

In his acceptance speech, Shorraw quoted civil rights leader and former United States congresswoman Shirley Chisholm, who said “You don’t make progress by standing on the sidelines, whimpering and complaining. You make progress by implementing ideas.”

But, Shorraw said, progress doesn’t happen when one person does something alone. “All of us here could not have accomplished the things we’ve done without the support of the people around us,” he said.

He also praised the work of the Mon Valley Initiative in reaching across municipal and county boundaries to help share information and ideas. “As a regional collaborative, we have made great strides and progress in our communities,” Shorraw said.

Spangler thanked the Monessen CDC as well as the other groups represented by the Mon Valley Initiative. “Everyone here has worked tirelessly to bring positivity and change to the communities they call home,” she said.