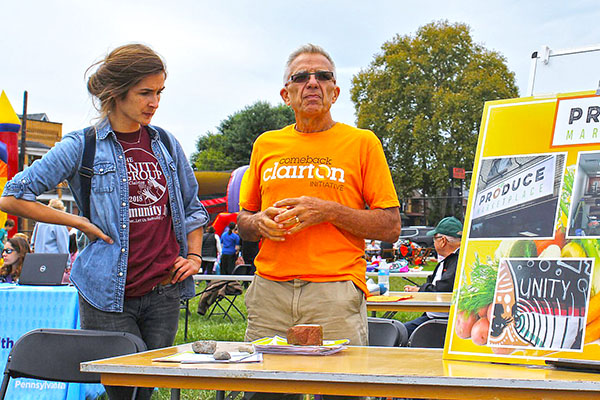 Clairton Cares is a more collaborative approach that is working to address the root causes of health inequalities by providing critical connections between organizations working on preventative care, access to healthier foods, mental health and wellness and youth programs.

“With Clairton Cares, we’re taking a system-based approach to health improvement which encompasses the whole community ecosystem,” she says.

The Clairton Cares initiative, launched in 2016 and now part of MVI, works with residents, social-services providers, health care practitioners, educators and other community leaders to create a more holistic model of care focused on community wellbeing, not individual interventions.

“What we’re learning is that building these kinds of relationships is incredibly important,” Nagel says. “We’re trying to create a complementary, or mutually reinforcing, vision of health and well-being between residents, community groups and providers. Those three stakeholders are important, and having a community-embedded component is critical.”

Nagel works from an office in Clairton’s municipal building as well as from the Produce Marketplace, located on St. Clair Avenue, about a block from where the Clairton Inn development is rising.

Produce Marketplace was created after residents raised the need for a fresh grocery store. Since the closure of Clairton’s last supermarket about 15 years ago, the city had been served only by convenience and dollar stores selling processed foods that are often high in sodium, refined sugar and fat.

Felix Fusco, a lifelong Clairton native who retired from a career in retail management, oversees day-to-day operations of Produce Marketplace. The store added new store hours and days of operation in 2021 and  carries a variety of fresh fruits and vegetables, in season, as well as locally sourced items.

“Our philosophy is very simple,” Fusco says. “We bring fresh food to Clairton in a dignified, convenient way for all of the community. We’re not in competition with Dollar General or Rite Aid. We don’t carry cleaning products or potato chips. We carry fresh fruit, fresh vegetables, deli meats and cheeses.”

Fusco also helps with a community garden, which was an early project of the NPP. He remembers when Clairton was a thriving post-war community, and was discouraged to see the city becoming depressed in the 1980s and 1990s.

“We’re seeing an opportunity to turn the corner now in Clairton and MVI is a major part of that,” Fusco says. “There is some light at the end of the tunnel. I’m very pleased where we are right now.”