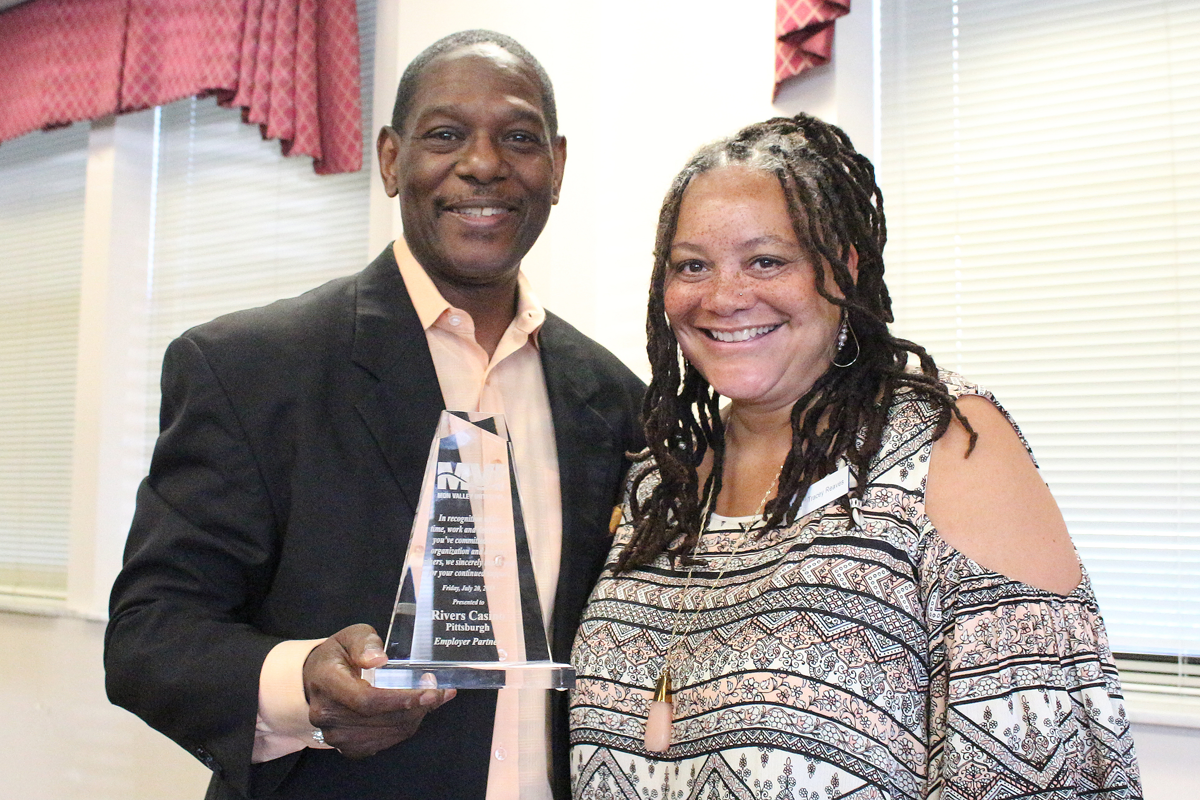 Six years ago, Rick Cobbs was worried. His job as a social services administrator was about to be eliminated and after 25 years in the field, he wasn’t sure what to do next.

Cobbs was referred by United Way to Mon Valley Initiative, where he enrolled in the workforce and business development program at the Homestead office. After receiving one-on-one career counseling and help with updating his resume, Cobbs was hired by Rivers Casino Pittsburgh.

Now, Cobbs sits on the other side of the table, as a human resources recruiter for the North Side-based entertainment venue.

“Out of the agencies I work with, MVI is hands-down the best,” Cobbs said July 20 at MVI’s annual Employer Appreciation Breakfast.

Also honored on July 20 was Vann Rutledge of McKeesport, who said he came to Mon Valley Initiative after years of being under-employed.

After career and life skills assistance, Rutledge works for Rainbow Kitchen in Homestead as a cook. “When I came to MVI, I felt important and I felt needed,” he said. “I didn’t feel there was any judgment of me.”

The keynote speech was delivered by Patrick Dowd (above), executive director of Pittsburgh-based Allies for Children, a non-profit advocate for programs for young people and families.

Dowd discussed the “Our Kids, Our Commitment” campaign to put a question on the Nov. 6 general election ballot, asking whether Allegheny County voters want to create a children’s fund.

If the initiative is placed on the ballot, and approved by voters, a 0.25-mill countywide property tax would be levied to support the children’s fund, which would be overseen by an independent board of directors and would support programs to provide early childhood education, afterschool activities and nutritional support.

“We know there are many more kids out there who want to participate in these programs than there are slots for kids,” Dowd said. “We can’t wait around for Harrisburg and D.C. to wrestle with these problems. We need to talk about how we can act here at the local level.”

There are approximately 30 counties across the United States that have created similar funds, Dowd said. “I’m from Missouri, and right now it leads the nation in county-based children’s initiatives,” he said. “I’m confident in saying that if they can do it, we can do it.”

Organizers are trying to gather 40,000 signatures to put the referendum on the ballot, he said. “No petition has every qualified for the ballot in Allegheny County before, because the threshold is high,” Dowd said. “As it should be. We believe there should be hardy and robust debate.”

MVI’s Workforce and Business Development Program provides career and job counseling services for people who are unemployed and under-employed; helps to match employers with people who are looking for work; and advocates for the unemployed, including ex-offenders.

Services are provided in Homestead and Charleroi to people from Allegheny, Washington and Westmoreland counties. For more information, call 412-464-4000 or 724-565-8040.