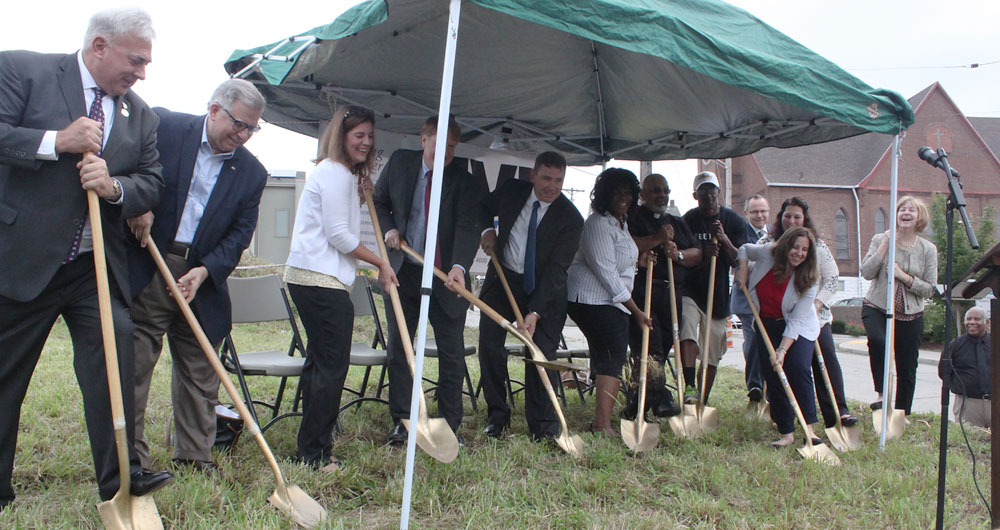 More than 100 Braddock-area residents, business owners and neighbors turned out Aug. 11 for a groundbreaking ceremony at the site of the new Braddock Civic Plaza.

Located along Braddock Avenue between Fourth and Fifth streets, the plaza — the size of a football field — will be built on a portion of the former site of UPMC Braddock Hospital, which closed in 2010.

“But as we write this new chapter, I think new memories and more wonderful happenings than ever before will take place on this site,” she said. “The past is gone, but this is a new beginning for Braddock. We’re going to have parties on this site — receptions and weddings, and a lot of great things.”

The park is being developed by the non-profit Mon Valley Initiative in cooperation with Braddock Borough and the site’s owner, TREK Development Group. Designed by Klavon Design Associates and Herbert, Rowland & Grubic, Inc., Braddock Civic Plaza will include the borough’s first significant planned greenspace as well as water and power connections for food trucks. About 8,000 people live within a half-hour walk and more than 7,900 vehicles pass the site daily.

“I’m always proud that this is my home town, and today, I’m really proud,” Zinski said. “This site represented a pretty significant loss for this community when the hospital left, but it is not a loss any more. All of these people who care have taken the time to make an investment. They believed in a local vision and they listened to what the community was asking for.”

Allegheny County’s commitment to the project came at a crucial time and helped close the last financial gap that was preventing the Civic Plaza from moving forward, she said.

“Like they have helped so many times in the past, our friends at Allegheny County stepped up to the plate and delivered,” Zinski said.

Fitzgerald thanked the state as well as the three foundations that together have pledged $450,000 toward Braddock Civic Plaza.

Civic Plaza is being created as the result of a six-year-long process of re-envisioning the Braddock Avenue commercial corridor. In September 2011, a public meeting was held in Braddock to review development concepts for the old hospital site. One of the plans included the creation of a community plaza along Braddock Avenue. The overwhelming majority of the people at the meeting voted for the option that included a town square or plaza.

The plaza will sit the center of three other new developments, including an apartment complex called The Overlook, constructed in 2013 on another part of the former hospital site; The Avenue Apartments, a 53-unit senior housing complex; and a new commercial building at 501 Braddock Avenue which houses an Allegheny Health Network urgent care clinic as well as the office of state Rep. Paul Costa.

Nearby is a mixed-use commercial and residential building, owned by Mon Valley Initiative and located in several connected structures that once housed the Braddock Free Press newspaper, an Odd Fellows lodge and Guentert’s Bakery. Renovations to the buildings were recently completed and it is now fully leased.

Davin praised citizens, volunteers and community leaders for engaging in the planning process.

“What we’ve been preaching at the state level is that local residents have to want to get things done, and you folks have done it here in a tremendous way,” Davin said. “You had a gut punch with the closing of the hospital, but you didn’t stop — you maintained your composure and you kept advocating for resources through the local officials, the state and the federal government.”

Braddock Civic Plaza will be “a testament to your fortitude and what you’ve done,” he said.

TREK Development will donate to Braddock Borough the deed to the Civic Plaza property once the work is complete, Zinski said.

“TREK Development could have done a lot of things with this parcel, but they listened to what the community wanted,” she said. “It’s great to find partners like that who will work with the community. We’re grateful for their work.”

A contract for the construction of Braddock Civic Plaza will be awarded soon, and a target date for completion announced in the future.